There are very few joys as exciting as finding an absolute gem within a pile of old junky coins. The pure exhilaration of pulling an expensive coin out of a pile of inexpensive junk is a feeling that’s hard to beat within the coin collecting industry. Unfortunately, finding coins worth more than their face value often takes quite a bit of searching.

But we’ve got you covered. Using just a few tips can help anyone become an expert at quickly identifying valuable coins. Some limited edition silver coins can fetch a value upwards of $2,000, especially if they happen to be in relatively new condition. With any coin, determining values is a matter of identifying the design, year, and mintmark of the coin. All of these factors (and more) can contribute to the overall value of the piece.

Designed by the famous U.S. Mint engraver George T. Morgan, the 1879 silver dollar features Lady Liberty’s facial profile on the obverse side and the classic American bald eagle on the other. These images make the 1879 Morgan silver dollar one of the most recognizable and valued silver dollars in the world.

If you’ve got a huge pile of old silver coins, finding any 1879 Morgan silver dollar should be an exciting moment. But your valuation process doesn’t end here. Both the condition and the mintmark of your silver dollar can seriously impact its value on the open market. Don’t worry– we’ll explain everything you need to know about evaluating 1979 Morgan silver dollars in today’s guide.

It’s sometimes easy for new coin collectors to divorce beautiful silver coins from their history. This would be a mistake. The history of silver dollars and other bullion pieces in the United States is particularly rich. The United States Mint is one of the most respected in the world; the coins produced by this mint regularly carry tremendous value among collectors all over the world.

This coin was initially minted during an exciting time for the American bullion economy. When the federal government passed the Bland-Allison Act, the Treasury began buying bullion to mint a large number of silver coins with $1 face values. This act eventually resulted in the creation of many of the silver coins collectors prize today.

Part of the historical impetus for this unprecedented and important governmental decision was the Comstock Lode, which is widely considered the first big American discovery of silver. While gold was also present in the valuable mines of the Comstock Lode, it was silver that eventually inspired one of the most famous and valuable types of coins in the history of bullion: the American silver dollar.

The Morgan silver dollar gets its name from its designer, the world-famous engraver George T. Morgan. Morgan himself was an immigrant, migrating from England to the United States in 1876 in order to work in the U.S. Mint as an assistant to William Barber, another popular artist at the time. It didn’t take long for Morgan to make a reputation as an incredibly skilled engraver; he designed the first of the Morgan silver dollars in 1978, just two years after migrating to the USA!

This makes the 1879 silver dollar only the second version of the Morgan silver dollar series to be produced. Like the 1878 version, the piece can carry considerable value, depending on a few different characteristics that can vary from coin to coin.

The history of the 1879 silver dollar’s beautiful design is closely linked to the imagery of Lady Liberty. Liberty is a well-known symbol for the values of the United States, but the concept’s depiction as a beautiful woman goes back way further than the U.S. Libertas is the Roman Goddess who personifies liberty. Her image has been used on coins dating back over a thousand years!

When George T. Morgan set out to design his version of the American silver dollar, he wanted to create a version of Lady Liberty that seemed distinctly American. He reached out to Anna Willess Williams, who was working as a grade-school teacher of philosophy at the time. Morgan saw her as an ideal model for the American female personification of Libertas.

The 1879 silver dollar features the portrait of Williams on its obverse side. She wears the Phrygian cap, and her hair band includes the inscription “Liberty” to further cement her symbolic identity.

The reverse side, as you might probably guess, includes the classic American bald eagle. Here, it holds both an arrow bundle and an olive branch. Symbolically, this depiction has quite a bit of significance to American culture. The bald eagle holds both a symbol of peace and a symbol of war, simultaneously invoking the American willingness to defend itself and its commitment to peace.

You shouldn’t have too much trouble figuring out whether or not your coin is an 1879 Morgan silver dollar. There are a few key giveaways that the coin you have is the 1879 edition of Morgan’s classic silver dollar design. To start with, you’ll note its size and face value. The coin will be clearly larger than other coins, including the U.S. silver quarter. It will have a face value of $1 USD, which will be clearly inscribed at the bottom of the reverse side.

One important thing to note is that the Morgan Silver Dollar design remained relatively static throughout its initial production period. You’ll want to be sure to note the year of your coin, as different mint years have different values to collectors. The mint year for the 1879 silver dollar will be inscribed right below the neck of Liberty on the obverse side.

The obverse and reverse designs are also clear giveaways of the piece’s identity. George T. Morgan used Anna Willess Williams as the model for his take on the centuries-old “Lady Liberty” personification. If all else fails, it might be helpful to just look up a picture of Ms. Williams. If the obverse portrait on your silver coin looks like her, you’re dealing with a Morgan dollar! 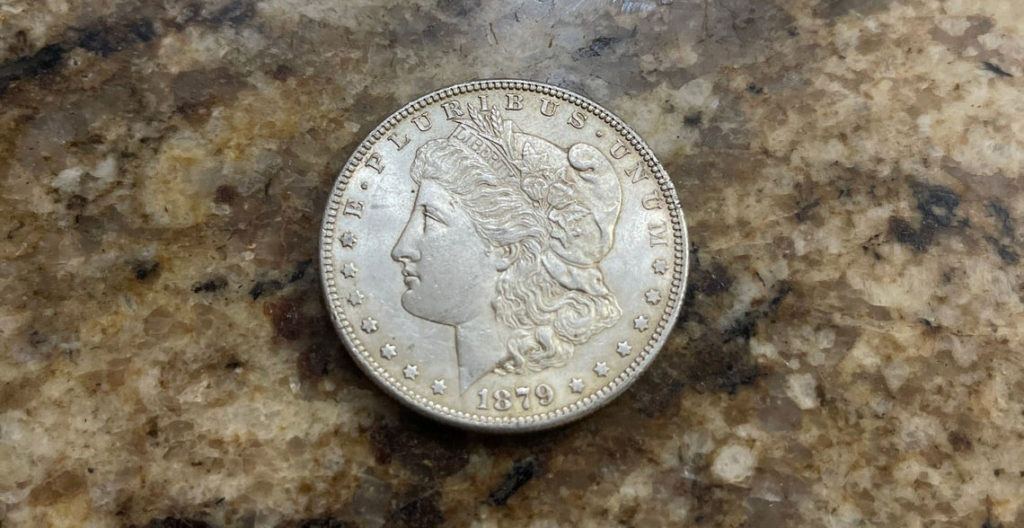 Truthfully, there are many resources online that can help you identify the 1879 Morgan Silver Dollar. When in doubt, consult one of the many online silver coin collecting communities on the internet. Comparing your coin to the images listed on popular coin distributors is another good strategy.

The two most important factors in the value of your 1879 silver dollar are its mintmark and its condition. Let’s start with the mintmark. Coins created and distributed in the United States can come from several different mints. The origin of a coin is depicted by a mintmark, a small letter or series of letters that represent the mint that struck the piece.

This particular silver piece can be struck with five different mintmarks, each representing a different United States minting facility. Here’s a list of the mintmarks possible on the 1879 silver dollar:

Generally, all coins of this year and series are worth quite a bit more than their face value. With the exception of coins with extreme damage and circulation, most 1879 Morgan dollars will sell for at least $10 or more. If your coin includes an exceedingly rare mintmark, however, it could sell for thousands of dollars!

The big mintmark to look for on the Morgan 1879 Silver Dollar is the “CC” mark. The Carson Mint only minted around 756,000 of these silver dollars! This makes it exceedingly rare, even compared to other coins of the same design. If you have an 1879 silver dollar with a “CC” mint mark on it, our advice is to seek professional evaluation on its price. Variations of this coin minted in Carson City can easily be worth thousands of dollars, and those in exceptional condition can be worth $10,000 or more.

The other mintmark versions of the Morgan Silver Dollar vary in price but are generally less valuable than the CC version. The San Francisco Mint, for example, released over nine million Morgan Silver Dollars in 1879. The New Orleans version is slightly rarer, having been struck around 2,887,000 times.

If you’ve got a Morgan silver dollar on your hands, we’re sure you have a few questions. This section will answer some of the most commonly asked questions coin collectors have about this famous piece and its valuable variations.

Q: What is the most valuable Morgan silver dollar?

A: For the 1879 edition of this coin, the most valuable mint mark is easily the Carson City version. If you have an 1879 silver dollar with a small “CC” inscribed on it, we recommend getting it professionally graded immediately. Some coins in near-mint condition of this kind can sell for several thousand dollars.

Q: How pure is the silver in a Morgan silver dollar?

A: These coins are minted using .7734 pure silver. Although modern coins use purer silver, the value of this coin comes from its rarity and historical significance, rather than from its price in silver.

A: All of these coins are valuable in at least some way, but some are worth far more than others. The most important factors in the value of Morgan silver dollars are the mint mark and the condition. Coins minted in Philadelphia are worth $20 or more, but pieces from the famed Carson City Mint can fetch thousands of dollars in auctions.

A: Yes! This is actually part of the exciting history of this particular coin. For around 80 years, these coins were regularly used as a form of currency in the United States, much like we use quarters, dimes, or other coins to buy goods and services now.

Wrapping Up: The 1879 Silver Dollar

As we said, it would be a mistake to separate this coin from its exciting history. Initially designed by an American immigrant in order to personify the American concept of liberty on a beautiful silver coin, the Morgan Silver Dollar has long been a classic coin prized by collectors all over the world.

When you’re searching through a bag or box of old coins, looking for an 1879 silver Morgan dollar should be one of your first priorities. Identifying the coin should be easy; look for the unique depiction of Lady Liberty on the obverse, the year, and the face value of $1 USD.

But once you know that you have one of these pretty old coins, your next step is to figure out if you have one of the extremely rare “CC” mint mark variations. While all coins in this series are relatively valuable to collectors, the variations struck in the Carson City Mint are often some of the most valuable collectible coins available.

If you’ve stumbled across one of these rare and valuable coins, be sure to have it professionally graded. The process of grading involves using a seasoned collector to figure out how circulated the coin has become over time. Coins that have been highly circulated, and especially those with blemishes and other imperfections, carry diminished value.

But there’s nothing more exciting than accidentally finding a valuable coin in brilliant uncirculated condition. For the 1879 silver dollar, finding a BU edition of the coin can mean an incredible payday of thousands of dollars. Even if you don’t end up with the prized CC mint mark Morgan silver dollar, looking out for these beautiful coins is never a bad idea.