What Are the Best Silver Coins to Collect?

Hero Bullion offers a wide variety of different silver, gold and platinum coins from around the world. Perusing our site can be a little overwhelming, even for people who have been active in the bullion community for decades. In fact, members of our own staff have admitted to losing themselves in the long list of different silver coins we sell! For inexperienced or new bullion collectors, finding the best silver coins to collect is a near monumental task. Should coin collectors prioritize coins minted by the United States Mint over those created by other state-sponsored mints? How is a coin’s collectable value calculated?

These are just a couple of the questions we hoped to answer when we established the Hero Bullion Academy. The truth is that the list of the best silver coins to collect is constantly changing. In the past couple of decades, public interest in collecting silver and gold coins has absolutely exploded. Mints all around the world produce silver coins with incredible designs, and it’s tough to know which new coins will eventually be known as premier collectable silver pieces. However, some of the top coins on our list of the best silver coins to collect have been minted continuously for over a decade.

Keep reading to learn more about the best silver coins to collect in 2022.

How to Buy the Best Silver Coins

Online silver coin sellers will usually offer a wider range of products than in-person companies. While this will make little difference when it comes to the most popular silver coins (including the incredibly common American Silver Dollar), online shops are certainly the best place to find coins from around the world. Distributors like Hero Bullion are able to secure deals with a variety of popular mints from nearly every corner of the Earth, meaning that they can offer something for virtually any taste or interest.

You can also buy the best silver coins directly from mints. All of the coins on our list today are produced exclusively by government-backed mints. In fact, this is actually what separates a silver coin from a silver round. Silver rounds can be produced by any private or public mint, but coins can only be minted by government-backed producers. The coins that we focus on in today’s guide, the American Silver Eagle, the Silver Britannia, the Canadian Silver Maple, and the Mexican Silver Libertad, are all minted and distributed by government mints.

Buying straight from a mint is one way to cut down on costs for your collectable coins. There’s a downside to this strategy, however. Mints often only sell coins from the current year, as well as the previous year. This makes it difficult to find previous editions of popular coins, at least if you’re buying directly from the mint. Simply put, you can buy some of the best silver coins to collect directly from their mints at a low price, but coins in the same series from different years can only be found at third-party distributors and dealers.

The Silver Britannia coin is a benchmark of the bullion industry. Since 1997, the piece has been distributed by the British Royal Mint. But the history of Britannia as a symbol is much more impressive. Some sources suggest that Britannia has been employed as the feminine personification of Great Britain for over a thousand years.

On this coin, she appears on the reverse side. She wears a flowing gown and carries two items: a trident in one hand and a British shield in the other. The Silver Britannia Coin is considered the best silver coin to collect by people all over the world, a fact which comes down to both the design and the history of the brilliant piece.

On the obverse of this coin, Jody Clark’s 2015 depiction of Queen Elizabeth II is featured. Her pearl earrings and crown are particularly detailed when struck into the .999 purity of the piece. Until 2012, the Silver Britannia was struck with only .958 silver, but the British Royal Mint switched to this higher purity in 2013. The Silver Britannia was originally only minted using gold, a tradition which persisted from 1987. The first Silver Britannia Coins premiered in 1997, and they’ve become a staple of the industry since.

Because the Silver Britannia Coin is minted and distributed by the British government, it comes with a face value of 2 Great British Pounds. We are particularly impressed with the intricate detail on the reverse of this famous piece; even the flowing gown of Britannia is shown in incredible detail. The textured appearance of the piece is really something to behold, and this likely contributes to the enduring popularity of this exciting silver bullion piece. 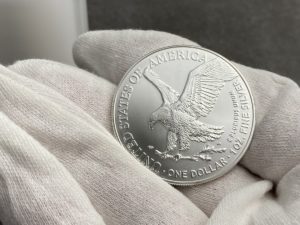 This piece is known as the official silver coin of the United States. It has been minted as a bullion product by the United States Mint since 1986, and it is now available in completely uncirculated condition. The coin has a face value of $1 USD, which is backed by both the U.S. Mint and the federal United States government. Like the Silver Britannia Coin, the American Silver Eagle is struck using .999 pure silver. Set against this high purity, the designs on both the reverse and obverse of this piece are highlighted in brilliant detail. Adding to the collectable value of this annual release is the fact that the 2021 edition of the coin will feature an all-new reverse depiction.

The obverse of the American Silver Eagle features a walking Lady Liberty. Like the feminine depiction of Great Britain we see in Britannia, Lady Liberty is the female symbol of the United States of America. Here, she is shown walking forward toward a rising sun. She wears a beautiful flowing gown and carries a bundle of olive branches. Every part of this depiction symbolizes an aspect of the American people and culture.

The original reverse of the American Silver Eagle was the American heraldic Eagle, the very same symbol used in the American Presidential seal. Thirteen stars are positioned in a triangle above the eagle’s head, which symbolize the thirteen original colonies of the United States. In 2021, coin designer Emily Damstra will be premiering an all new reverse-side design. This depiction features a detailed bald Eagle flying and carrying a single olive branch. The new design is one reason why the American Silver Eagle remains one of the best silver coins to collect. 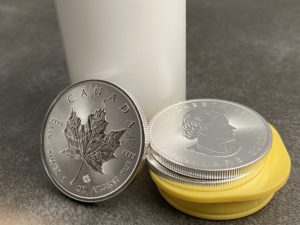 This coin actually offers a higher base silver purity than most of the other coins on our list. This piece is struck using .9999 pure silver. But this high purity certainly is not the only reason why this coin endures as one of the most popular bullion coins in the entire world. The Silver Maple Leaf coin is minted once annually by the Canadian Royal Mint, which produces official silver bullion backed by the federal government of Canada. The coin was designed in 1988 and has been minted once yearly since then. In 2014, the piece actually got an all new micro-engraved laser mark to add to its existing security measures.

The Canadian Silver Maple Leaf Coin’s obverse pays homage to Queen Elizabeth II, much like the Silver Britannia Coin we discussed above. Here, she is shown as depicted by artist Susanna Blunt. Curiously enough, Blunt’s art of the Queen doesn’t depict her wearing her crown. Instead, she wears her pearl earrings and a pearl necklace. Even the curls in her hair are brilliantly displayed when set against the .9999 silver bullion the coin is struck with.

National pride is a recurring theme in our list of the best silver coins to collect. The Canadian Silver Maple Leaf Coin does not disappoint in this category! Even coin collectors who know nothing about Canada probably recognize their national symbol, the sugar maple leaf. This detailed maple leaf is the centerpiece of the coin’s reverse side. Even the intricate veins of the Canadian Maple Leaf are visible in this detailed coin’s design. 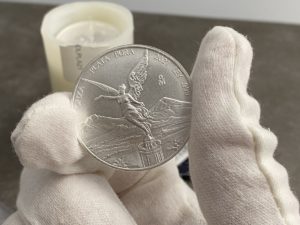 While the U.S. Mint and the Canadian Royal Mint may come to mind before most other distributors, the Mexican Mint has actually been distributing their most popular coin for even longer than the American Silver Eagle or the Silver Maple Leaf Coin. The Mexican Silver Libertad has been minted continuously since 1982, and its obverse design pays homage to the impressive history of the Mexican government and peoples. The current seal of Mexico, also known as Estados Unidos Mexicanos, is centered. Around it, we see ten earlier versions of this seal. The result? A powerful historical message on the country and its government.

The reverse of this coin is truly something beautiful. Two incredible cultural symbols of the country are featured. First, the coin depicts “Winged Victory,” a national symbol that commemorates the country’s victory in Mexico’s war for independence. She wears a flowing gown from the waist down, and she gestures proudly as her wings flap behind her. Two Mexican volcanoes, the Popocatepetl and the Iztaccihuatl, are shown in the background. The result? A two-pronged depiction of Mexican culture, commemorating both the history of the peoples and the beauty of their natural landscapes.

The Bank of Mexico backs these national coins, which are given a face value of 1 Onza each. Another selling point of these unique collectable coins is that they are minted in limited numbers each year. In 2020, only 300,000 1 Oz Silver Mexican Libertad Coins were minted. This makes it both a beautiful and a rare commodity for collectors, giving us one more reason to consider it one of the best silver coins to collect.

How to Spot Fake Silver Coins

Spotting fake silver coins isn’t much of a concern if you’re buying directly from a mint or from an established bullion dealer. Buying the best silver coins from established distributors generally ensures that you won’t fall victim to scams. But for our readers who buy from pawn shops, local dealers, or smaller online mints, it’s always important to stay protected. We recommend several potential tests to help you ensure that your silver coin is actually made of silver. Coins that come with security markings are easy to establish as legitimate, and newer coins almost invariably come with distinctive features to protect against counterfeiting.

If you doubt your silver coin’s authenticity, be sure to carefully compare its markings to the markings found on other coins of the same type. Any imperfections can suggest that the coin is illegitimate and might justify taking it to a specialist. We offer several tools on the Hero Bullion site to help you make sure you don’t get tricked with fake silver coins. Magnifying glasses can be particularly helpful when examining a coin’s details up-close.

Final Thoughts: What are the Best Silver Coins to Collect?