The Royal Canadian Mint has produced Canadian Silver Maples since 1988, nearly a decade after minting its gold counterpart.

Like others in the series, the 2020 Canadian Silver Maple continues to have an astonishing popularity. Each coin has a legal tender of $5.

With this year’s release, the 2020 Canadian Silver Maple Leaf series continues to prove its validity in the silver bullion industry, sustaining three decades of world wide popularity. The beauty and purity of each coin, regardless of size or denomination, make it an essential asset for any portfolio. All Silver Maples have their weight, purity and content assured by the Canadian Government. Each Silver Maple has 1 ounce of .9999 fine silver, arriving in Brilliant Uncirculated condition. All 1 ounce coins measure 38 mm in diameter, complete with reeded edges. They are the largest available size in the Maple Leaf family. The obverse design features her majesty, Queen Elizabeth II, while the reverse carries a highly detailed maple leaf imprint, a symbol that has been a source of Canadian pride for centuries. Individual coins will arrive in protective, plastic flips for your convenience, minimizing the potential for dents or scratches. Multiples arrive in tubes of 25 or Monster Boxes of 500. With an outstanding reputation for quality, excellence and attention to detail, an investment in any Silver Maple is a smart and secure purchase.

The Canadian Silver Maple was first produced by the Royal Canadian Mint in 1988. Designed by Arnold Machin, the original obverse design features a young Queen Elizabeth II, at age 39. The image remained until 1990, when it was replaced with a 64-year-old Elizabeth, and 14 years later, with a 79-year-old portrait of her majesty, designed by Susanna Blunt. The 2004 update remains as the current, standard design. A variety of sizes and denominations have been produced since, in addition to several special edition and anniversary collections.  Like the bullion it produces, the Mint has a rich history that only lends to its remarkable reputation. While the first Canadian coins were originally struck in parts of England, the Royal Mint was officially founded in Ottawa in 1908, thanks to the patronage of a handful of British noblemen and women. As the Mint continued to grow, it became overworked and antiquated, but it was not until 1976 that RCM opened the Winnipeg branch. Although discussions for this second offshoot began in the early 1960s, the project was unable to move forward due to political tensions and disagreements. After the strain had settled, and the Winnipeg facility finally opened its doors, the Royal Canadian Mint swiftly began to rise in popularity, building the reputation of excellence it holds to this day. The RCM continues to be one of the most renowned and celebrated mints in the world, producing billions of coins every year for over sixty countries worldwide.

Unlike its competitors, the Canadian Silver Maple has carried a lasting and consistent design, with only a few minor changes over the years. The obverse features a portrait of Queen Elizabeth II, originally designed by artist and sculptor Arnold Machin. Machin’s work was additionally used on a variety of currency from Australia and New Zealand. The design has changed on three separate occasions, depicting the queen’s age throughout her monarchy. It was last updated in 2005. “Elizabeth II”, “5 Dollars” and the year “2020” are additionally engraved.  The reverse image features Canada’s national symbol, the maple leaf. The significance of this foliage has been traced back to early French Canadian settlers in the 19th century, who were enamored with the leaf, claiming it was the most majestic in the forest. The significance of the maple leaf has stood the test of time and continues to be a symbol of pride, unity and solidarity. The word “Canada” is inscribed, as well as the coin’s weight, purity and silver content. The RCM added security measures in 2014, including radial lines and a micro-engraved maple leaf mint mark. The detailed artistry of this design undoubtedly will make it an instant classic that is desirable to both investors and collectors around the world. 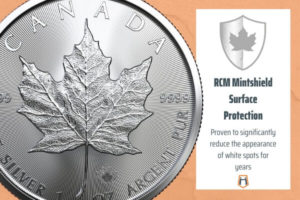 Each 2020 1 oz Silver Maple Leaf is composed of 99.99% pure silver in Brilliant Uncirculated condition. All Silver Maples have their weight, purity and content assured by the Canadian Government.

Each one ounce Silver Maple Leaf will arrive in a protective, plastic sleeve, minimizing any potential for dents and scratches. Bulk options include tubes of 25 or Monster Boxes of 500, arriving in original RCM packaging.

The Royal Canadian Mint has an established reputation you can rely on, with four decades of astonishing experience. The RCM is known to produce billions of coins per year, for themselves and a variety of other countries. They are easily one of the most trusted mints in the world. The Canadian Silver Maple Leaf is a universal symbol of reliability and authenticity. The Maple Leaf is a great way to diversify any portfolio, with an iconic design and high liquidity. Each 2020 edition is IRA approved and guaranteed by the Canadian Government, so you can be sure you are making a wise investment that will last a lifetime. If you have any questions regarding the 2020 Canadian Silver Maple 1 oz Coin, please do not hesitate to reach out to our team at Hero Bullion.